The Greek Museum The Center for Greek American Heritage

Welcome to The Greek Museum - The Center for Greek American Heritatge

Making a Dream Become a Reality

On behalf of the Board of The Greek Museum, the Center for Greek American Heritage, we offer sincere congratulations to The National Hellenic Museum of Chicago for their opening.  We know that many years of hard work and tremendous effort has been put forth to open this prestigious institution.  We admire their determination and know that this musum will be a valuable asset to Hellene and Phil-Hellenes.

As the Co-Founder of the Greek Museum in New York, let me state that years ago, Anastasia Nicholas, Co-Founder, and I attended a conference in Chicago.  We had the opportunity to visit a small Greek museum that had been created in the mercantile center of the city.  We were very impressed and so inspired by the ideas of such a museum to preserve and record the story of our immigrant forefathers that we returned to New York City determined to establish a similar institution in the metropolitan area.  We had a great role model with the group from Chicago and also learned that a similar museum had been established in Salt Lake City telling their story of our immigrants out west!

We took on this challenge, and we have been working to establish such a museum in New York.  We have been chartered by the State and have our tax exempt status.  With the help of many in the metropolitan area, we have been working to open a museum here.  Our research revealed that there are twenty four other immigrant museums in the City of New York, but none for the Greeks.  We are truly an under documented minory.  We have no research library to document our story and no repository.  Since New York served as a portal for so many of our people, it is truly necessary that we have a museum to preserve, record, and inform the public about the contributions of our forefathers.  Many who entered New York settled in other parts of the country., so the establishment of regional museums such as Chicago and Salt Lake City are necessary.  In addition, efforts are being made to establish simialr museums in California and in Massachusetts.

Frankly, time is running out in trying to find the necessary old documents, photographs, and artifacts.  These are necessary to accurately tell the story of our forefathers.  Many of these items are being lost or destroyed.  As the generations move forward, we as a mnority group have been tremendously successful in every field of endeavor.  We should be willing to support the establishment of museums to record our story before the valuable data is lost.

A key mission for the Greek Museum is to raise awareness to the importance and neccesity of opening such a museum here.  With the help of our Honorary Board and our Working Board, we have been collecting artifacts, books, records, photographs.  These photographs have been reproduced and many have been used in various photo lectues that we present to various organizations.  We have been conducting oral interviews of elders, from various backgrounds who discuss their experiences as a Greek American immigrant.   We have mounted two exhibits:  one at the Greek Consulat in Manhattan and another at the Queens Historical Museum in Queens.  In addition, we have annually participated in the New York City Immigrant Heritage Week programs, doing presentations around the city.  Plans in the future include a book and a video.  All the material we have colllect is in an insured location.

Although there has been financial support for this project, sadly, there has not been a groundswell within the Hellenic community, nor from the over 124 Hellenic organizations in the area to rally in financial support of this project.  Why?  All agree that such a museum is necessary in New York, yet major support has been withheld.  A popular line is "build it and they will come".  However, how can we build it if we don't have the money?

Perhaps with the success of this wonderful Chicago National Hellenic Museum people and organizations in the metropolitan area will realize the time is now to step forward and make this museum a reality.  For more information see our website  www.thegreekmuseum.com

Again, contratulations to the founders and supporters of the National Hellenci Museum! 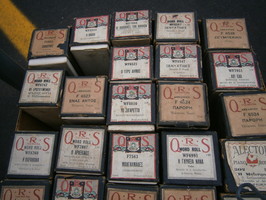 Where to find us

The museum is one "in the making".

The  museum is not open yet because we  are searching to find a suitable location within the New York metropolitan area.   More on that to follow!

We present rotating exhibits at various locations thorughout the city. Check back with the site to learn about our next presentation..﻿

Get Social With Us