The Greek Museum The Center for Greek American Heritage 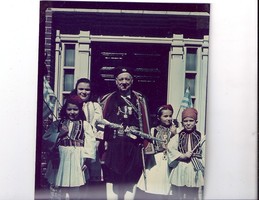 Preparing to march in the annual Greek Independence Day Parade on Fifth Avenue, circa 1948.

Bringing the Story of the Immigrant to Life

At this time, there is no permanent home for the museum, although the search is ongoing to secure a location in the metropolitan area.

The Greek Museum - The Center for Greek American Heritatge has an extensive collection of artifacts, books, records, and memorabelia pertinant to the GreekAmerican experience.  It has also digitalized an extensive collection of photographs, dating from the l800's telling the story of the immigrants, with their work, family, church and social commitments.  Each photograph has its own story. Their goal is to create an environment where visitors are not merely spectators but active participants – a place where the immigrant story and their contributions comes to life.

The Greek Museum - The Center for Greek American Heritatge will include an extensive collection of artifacts tracing the earliest arrival to the meteropolitan area up to the present.  It will show their commitment to integrate into the American world, while preserving their commitments and love of their homeland. 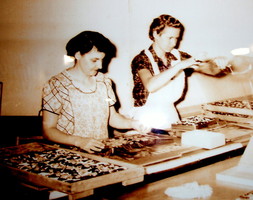 Candy making at the Supeior Candy Company, Staten Island in the l950's.

There is an ongoing search to secure additional artifacts, photographs, documents and books to add to  our permanent collection, The Greek Museum - The Center for Greek American Heritage.  As more individuals learn about the acitivies of the museum, more material is acquired to our collections.

The Greeks of New York City

The story of the Greek immigrants in New York can be seen as the fulfillment of a dream – namely, to come to America with the mission to make a successful life for one’s self and their family.  Today, in New York, we see that dream fulfilled and celebrate our ancestors’ arrivals in New York, their accomplishments and the road they paved for our own successes.

From 1820 to 1870, approximately 400 Greeks arrived in the United States.  During that time, the Immigration Center was Castle Gardens in Battery Park.  It was open from 1820 to 1892 and the Greeks referred to it as “Kastelgari.”  Many songs would be written and sung about the Kastelgari.

An early success story of Greek immigration was that of Alexander C. Evangelides.  His father, Christodoulou had graduated from Columbia College in l836, his education financed by a prominent American banker.  Though Christodoulou returned to Greece, he sent his son to attend Columbia. After graduation, Alexander worked at the New York Customs House, the Brooklyn Daily Eagle, and then in l886 he served as assistant secretary to the Mayor of Brooklyn.  He was later elected a Democratic representative of Brooklyn.

In 1844, the first Greek to become an American citizen was Basil Constantine.  Ioannis Celivergos Zachos, a Turkish born scholar, became the Institutions Curator at the Cooper Union University in 1870.  By the end of the century, Greeks began to flock to the United States and the community of in New York was burgeoning. Approximately 450,000 Greeks came to the Northeast, with the majority setting in New York City.

Many Greeks settled in lower Manhattan as most factory jobs were located there.  Later, others went onto Brooklyn and Queens, and some onto Staten Island.  Many became shop owners, running restaurants, grocers, florists, and confectioners.  They gained a successful presence in the ownership of shoeshine parlors, theaters, sweet shops and the fur industry as well.

Export was a highly successful industry for the Greek immigrants in New York.  Called “factors,” they imported spices, nuts, silks and cotton.  They also found success in coffee-making, like the Leveratos brothers who ran Karaskanka (founded in 1870) and Pascal which is still in business today.  Panagiotis Hatzikiris and Eleftherios Pellalas, sailors by trade, opened a candy factory in 1873 and then hired peddler to sell their sweets. Street peddling was popular amongst the early Greek immigrants and just before the turn of the century, there was a recorded 1,500 Greek peddlers selling products – cigars, flower, sweets, and such.

Flower vendors/shops started around the 1850s – Constantine Bambis became one of the first flower peddlers to make his mark in the industry, and soon others followed his success.  Greeks found work at shoe shine stands and boot parlors.  Many of the men and boys who arrived had little to no education and were frequently exploited by shop owners, but this only drove the Greeks to open their own successful businesses.

In 1882, Lekas and Drivas, a key food importer, set up a business on Roosevelt Street in Manhattan.  Their venture grew tremendously and they became a leading importer of Greek products including olive oil, spices and cheese. The furriers, who came mostly from Siatista and Kastoria and began setting up shops in the 1870s, also found success.  The 1890s also saw Greek immigrants begin farming in Bulls Head section of Staten Island.  Greeks also successfully lent their knowledge of tobacco trade to businessmen in the Manhattan and by 1895 there were 15 tobacco importers and producers and numbers swelled in the years to follow.

New York was home to the first Greek American newspaper in the country, Neos Kosmos ( New World ).  Then 1894, Solon Vlastos, an immigrant from Syros, Greece, decided to establish a weekly newspaper eventually evolved into the Atlantis.  By 1900, he had 3,400 readers and countless other papers followed Vlastos’s sample.   By 1915, the National Herald/Ethnikos Keryx began circulation. Atlantis and National Herald/Ethnikos Keryx, often sparred in their editorials, coming from different political views – one Royalist and one Venizelist.  However, during World War II, they put aside their differences and both greatly supported relief efforts.  Today, the National Herald/Ethnikos Keryx is still in publication with subscribers across the nation, reading the paper in both English and Greek as well as online.

By 1892, a “community” was settled and built the first New York church, Holy Trinity.  The following year, the Greek flag flew over City Hall and 300 Greeks marched through Broadway up to Chambers Street, celebrating Greek Independence Day.  This event was the forerunner to the parade started 30 years later and still happens today.

Annunciation Church was the second to be built in 1894, down at Washington Square, Manhattan.  Within twenty years, the first Greek School, the Greek American Institute, was opened in the Bronx.  Many other Greek schools followed, teaching language, music and tradition to the new generations of Greek Americans.  By 1922, the Archdiocese of North and South America was founded and based in New York City.  In New York alone, the Archdiocese supports 62 parishes in the District of New York.

Over 124 regional and fraternal organizations were established, many of which still exist today and have celebrated centennial anniversaries.  These societies are important to note as they evidence large groups of immigrants from the same regions in various neighborhoods of New York. Both the Cretan Society “Omonia” and Society Vryseon Anavrytis were founded in 1901; the Lemnian Society, 1903; Nauplion Society, 1904; Skoura Varvitsa Brotherhood in 1907; and Chian Society “Kalimatoton of America, Agios Aimilaros,” in 1907.

In 1920, the census in New York listed 20,000 Greeks in New York with the following businesses owned by Greeks:  grocers, fruit stands, florists, lunchrooms/luncheonettes, coffee shops, candy makers/jobbers, billiards/pool rooms, importers, furriers, barbershops, and butcher shops.  It should be noted that these numbers are most likely higher than reported as many of the early Greek immigrants were hesitant to respond to a government census.  In 1926, Atlantic Bank opened, charted by the National Bank of Greece, to serve the growing community, and soon had numerous branches throughout the five burroughs of New York.

While immigration slowed over the next few decades, Greek American success in New York did not.  Countless new businesses opened, children of Greek immigrants attended universities and found success in countless professions.  Then, in 1965 the number of Greek immigrants rose again as a result of the 1965 Immigration Act.  This ended the national-quota system and allowed countless Greeks to be reunited with family members already in America. Within ten years, more than 142,000 people arrived from Greece – the majority of whom settled in the New York City area.

It is credit to their “filotimo” that these immigrants succeeded regardless of the countless prejudices that they had to overcome.  Preserving our Greek immigrant history is of great value to us and the generations to come.  The Greek Museum, The Center for Greek American Heritage was born out of the need to document and preserve the accomplishments of the Greek settlers in New York.  Countless photographs, documents, stories and ephemera have been collected to narrate their story.  These immigrants made an impact and contribution in many diversified endeavors.  Preserving our Greek immigrant history is invaluable – in this way we are able to celebrate, commemorate and rejoice in their story, and in ours.

Photo of Katherine R. Tsamopoulos, aged 5, getting ready to march in the Greek Parade up Fifth Avenue in the early l950's.

In the long term plans, the museum would offer tours to youngsters, in particular, to make them aware of the contributions and story of this immigrant group.

Where to find us

The museum is one "in the making".

The  museum is not open yet because we  are searching to find a suitable location within the New York metropolitan area.   More on that to follow!

We present rotating exhibits at various locations thorughout the city. Check back with the site to learn about our next presentation..﻿

Get Social With Us